It’s all about the research, people!

Think of writing books as a three-legged stool. Surely one of the legs is research, fiction or non-fiction. When creating fiction authors can create an entire world and engage in flights of fancy. Non-fiction is an entirely different animal. In either genre the author better be right or suffer the criticism of readers who know better. 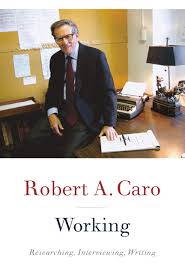 Which leads me to, Working, a book by a master of the art of research: Robert Caro, author of two of the most impressive biographies ever written about towering American politicians/builders who left massive footprints in their respective spheres of influence. Caro tracked the careers of New York power broker Robert Moses and President Lyndon Johnson (a multi-volume history now approaching its fifth book). His indefatigable work on both books captured the Pulitzer Prize for each.

Caro's latest book, a slim 207-page volume is titled, "Working." In this intriguing self- examination of how he digs into the mountain of paper each man left behind-in LBJ's case, a 32-million page trail-Caro shows how he leaves nothing to chance. His is an obsessive search for truth. One example was the oft-rumored story of how LBJ stole the 1948 Texas election for the U.S. Senate. No one had been able to prove the charge: until Caro unearthed the man who changed ballots for LBJ in the immediate aftermath of the contested vote. He also confirmed Johnson's storied philandering. Caro and his wife even moved to the Texas Hill Country to gain intimacy with his sources. He sometimes interviewed people long disappeared or thought dead.

His life's work, begun as a newspaper reporter, first drove him to write about the dictatorial power of Robert Moses, a legendary New York public works titan. Caro titled the book, "The Power Broker." It was an exhaustive task and without his wife Ina's help he would still be working on a final draft. One of Caro's newspaper editors had advised him early on to, "Turn every page" when researching his subjects. Caro made it his mantra.