Tracking Transnational Crime syndicates is like playing a never ending game of the old state fair Whack-A-Mole. True evil never sleeps and manages to stay one step ahead of world wide law enforcement. "The Good Mothers," is a new book by Englishman Alex Perry, a foreign correspondent and TV and film writer, who investigates organized crime. His target: Italy's most secret mafia spawn: the 'Ndrangheta. 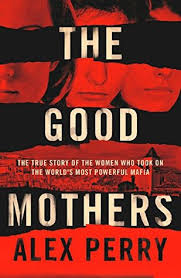 Perhaps the most powerful and far-reaching of Italy's mutant criminal states-within-a state, the mafiosos of the 150-year old 'Ndrangheta rule the foot of the Italian boot from their Calabrian stronghold. Theirs is a centuries old hold on all things criminal the length of Italy.

Controlling drugs, money-laundering, vice, kidnapping and murder. Rooted in a medieval patriarchy that practices matricide and filicide to maintain control of their families and ensure Omerta, silence, the men who rule 'Ndrangheta take the lives of those who step out of line.

Perry's shocking book pulls back the bloodied curtain and exposes this criminal gang by telling the horrific tale of Lea Garofalo, a "mafia princess" who married a brutal mafioso in her teens and bore him a daughter at seventeen. After witnessing murders, suffering beatings at her husband's hands and yearning for freedom, she fled with her daughter and turned against her family.

Talking to outsiders signed her death warrant but she persevered for her daughter's sake. Brutally murdered, her death showed the first fissures in what began an unravelling of the once secret 'Ndrangheta. Enter courageous Italian prosecutor Alessandra Cerreti, a breed of steel-nerved government servants who went to war with the gangsters. Another mother, emboldened by Lea Garofalo's speaking out, turned state witness to expose the evil in Calabria. She too, died a martyr's death in the fight against the 'Ndrangheta, but the campaign kept going. Evenually, scores of mafioso went to jail. Italy continues the war against this subterranean murder cult but the opening rounds have gone to the government.

Murderous criminals, such are all those locals who support the 'Ndrangheta with their silence or complicity, met their match before female prosecutors and judges, an unheard of irony that Alex Perry's "The Good Mothers" details with thoroughness. An important book.