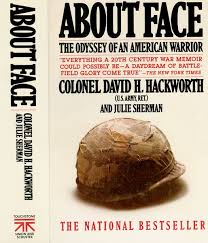 I finally tackled a book that was gathering dust on my closet shelf for fifteen years: Col. David Hackworth’s “About Face,” a scorching military memoir published in 1989. Part swashbuckling tale, Korean War diary, notes from the Cold War, and Vietnam’s debacle, “About Face” is an important indictment of the way these wars were run. Hackworth, winner of a Korean battlefield commission and a chest full of medals, spares no one, including himself, in this autobiography. Called by many, “One of the Army’s most impressive combat leaders,” Hackworth was blunt, profane, irreverent, pugnacious, and unsparing in his account of senior leadership’s glaring failures. Forever an infantryman at heart, he married the Army for life, only to be disappointed by the political maneuvering the higher he climbed in rank. 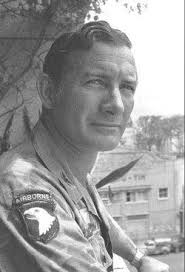 His best-selling book remains valuable on several levels: his take on leadership in battle, his imaginative approaches to problem solving, and the art of motivation. In public criticism of the Army during the Vietnam War’s last years Hackworth told the old tale of “The emperor’s clothes” and paid a truth-teller’s price. Disgracefully hounded by the brass and their Pentagon bosses, he retired and moved to Australia where he joined the anti-nuclear crowd. He became a respected syndicated columnist, writing incisive reports about strategy, political will, America’s military, and its role. It took me fifteen years to appreciate his book—Better late than never.