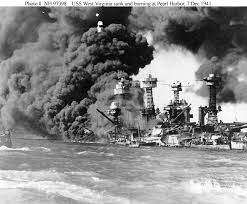 Yesterday was the seventy-fourth anniversary of Pearl Harbor. There soon will be no survivors of that attack to speak to visitors who visit Hawaii to see the site. I grew up in Hawaii in a military family—my father was a WWII Navy veteran—and often visited the base with friends on Saturdays. As military dependents, we would show our IDs at a gate and catch a shuttle bus to roam the base at will. Our routine was the same: visit the base exchange, hop off the bus at one of many snack bars for a hamburger, fries, and malt, visit the submarine base memorial—the father of one of my close friends was lost during the war—stop at a Japanese "Human torpedo" on a pedestal, and then get back on the next bus for a ride to catch a boat ride to Ford Island. Pretty much deserted on the weekends, the island was home to an airfield, "Battleship Row" and mooring quays, numbered to remind everyone which ships had been there on that fateful day. The Arizona Memorial had not yet been built—in its place a plain wooden docking platform from which the flag flew. The rusting turrets and hazy outline of the hull were visible, the oil bunkers leaking as they still do. On the return, we would pass "Ten-Ten" dock, another scene of carnage that December day. It was a lazy Saturday adventure, but even as a teen I was struck by the sacredness of the setting. It was easy to imagine another sun-filled day that began so quietly.

After my father, dressed in formal whites, retired from the Navy at a brief change of command ceremony, I began a ritual phone call that lasted until his death at age 95. Each December 7, at 7:55 a.m. Hawaii time, I would call my father and announce, "Air raid, Pearl Harbor. This is no drill!" My father would respond with a call to "General quarters" and we would chat briefly about the fate of the Pacific Fleet that morning so long ago. He had not been at Pearl Harbor that morning. Instead, he was on destroyer escort duty in the Atlantic.

I have saved a December 7, 1941 page from his desk calendar, on which he noted the attack. Since his death I no longer have anyone to call with the terrible news of the Japanese attack on our anchored fleet. The column inches devoted to news stories about that day shrink in size each passing year. In Hawaii, with the military still a sizeable presence, the day is solemnly marked at the graceful white marble memorial floating above the Arizona, the hulking USS Missouri in the background. But I wonder if succeeding generations will mark that date with the reverence it deserves. There is hope, however. My son calls me on occasions like D-Day and other benchmarks of WWII. But this year for some reason my phone did not ring. Perhaps next year. I did however; call my younger brother to alert him to radio reports of an air raid on Pearl Harbor. He did not answer, but I left a message.

It was easy to imagine another sun-filled day…