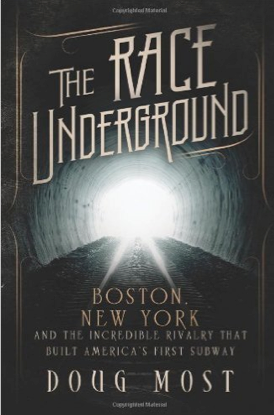 Can building a subway capture a reader's imagination? When the book is about two cities and their respective efforts to engineer subways beneath the ground on which they stand, the answer is a resounding "Yes!" Author Doug Most tapped the same (*pun alert) vein that David McCullough did when writing about the Brooklyn Bridge or the building of the Panama Canal. Boston and New York, home to the wealthy Whitney brothers, Henry and William, each desperately needed a modern answer to their urban transportation woes. Most weaves a terrific story about the Herculean challenge to go underground to find the solution to nosy, filthy, dangerous, overcrowded streets. He fills the pages with characters: scam artists, closed-minded city officials, robber barons, and stubborn visionaries. This is a tale of an urban revolution that opened the modern epoch of metropolitan transportation, the lifeblood of cities. The Race Underground: Boston, New York, and the Incredible Rivalry That Built America’s First Subway